Well, finally we have obtained a proper response from the Malaysian government. In June, we received a letter from the PM's office referring the matter to the Ministry of Human Resources. Note the letter dated 4/5/2012 was also sent to the Minister of Human Resources. The letter, which was sent  on behalf of the groups that issued the statement, included the following statement

93 Groups:- Abolish the ‘Contractor for Labour’ system Withdraw the 2012 amendments to Employment Act 1955.

Now, the letter is in Bahasa Malaysia (the Malay language), and I have hurriedly done a rough translation  which is included below. Best read the letter and then look at my comments here.

Having considered the letter, it is my opinion that the reasons given for the amendments to introduce 'contractor for labour' are lame and misleading

2- All employers, be they owners or factories or some small contractor is already required to abide by the Employment Act, and also maintain a register of their workers.

3 - The amendments was not so much to protect workers - but really contractors for labour (where unlike Private Employment Agencies is currently not strictly regulated and monitored by any existing specific law). The new amendments even giving these contractor for labour priority of debt which is usually accorded to workers only, usually with regard to unpaid salary, etc. Contractor for labour is given a special treatment compared to all other contractors and companies dealing with the principal - why is that?

5 - So, we must continue to call for the abolition of the contractor for labour, and repeal of all those amendments concerning contractor for labour. We already have Private Employment Agencies, and this is all we need for they can very easily assist principals to find workers, and assist workers to find employers.

The above are initial reactions only.. 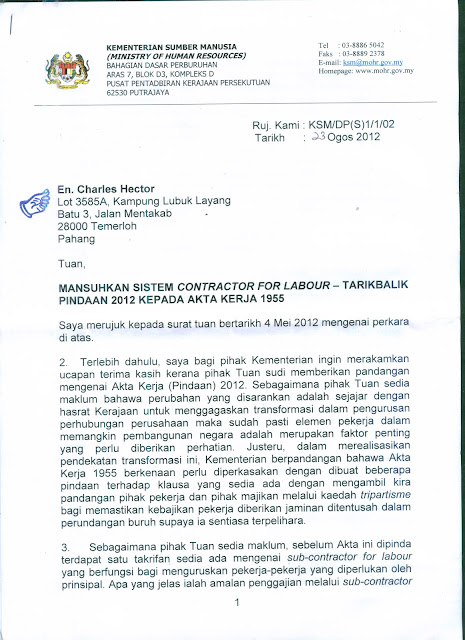 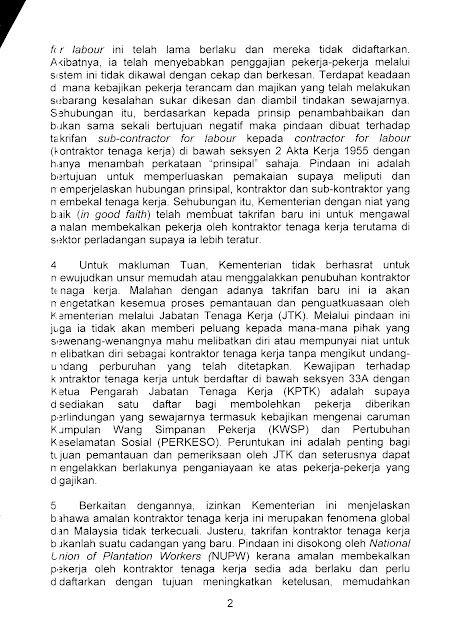 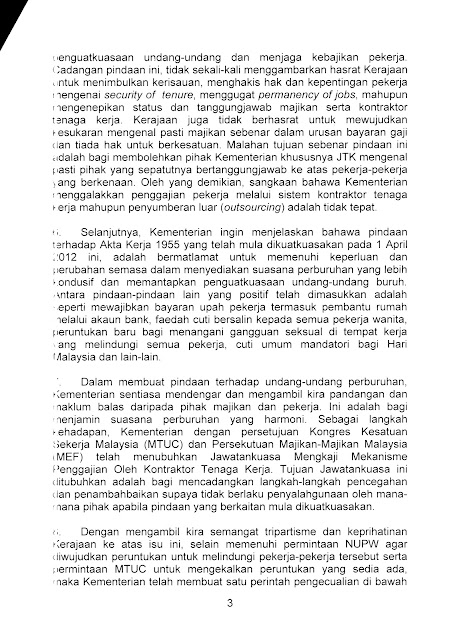 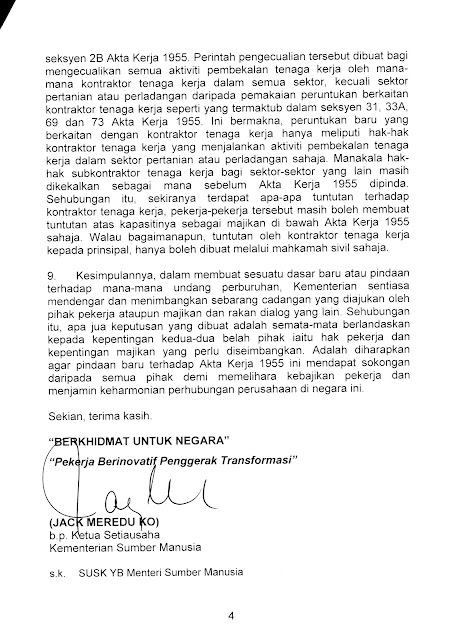 
(Below is a speedy rough translation from Bahasa Malaysia[Malay Language] to English of the letter dated 23/8/2012 that was received by me on 3/9/2012 from the Ministry of Human Resources. This letter is in response to the Letter and accompanying Joint Statement that was send on 4/5/2012, which was endorsed by over 90 different Trade Unions and Civil Society Organizations. Compare with the original Malay letter for confirmation of the accuracy of the translation)

2. In advance, I on behalf of the Ministry wish to record our appreciation to you for giving your viewpoints about the Employment Act (Amendment) 2012. As you would realize that the changes made are in line with the desire of the Government to implement transformation in the management of industrial relations and as such obviously the worker element in catalyzing development of the country is an important factor that much be given attention. Thus, in realizing this transformation, the Ministry is of the opinion that the said Employment Act 1955 need to be strengthened by making necessary amendments to already existing clauses after taking into consideration the views of workers and employers through a tripartite approach to ensure that the welfare of workers is given clear guarantees in labour legislations so that it is always protected.

3. As you would realize, before the Act was amended there was a pre-existing definition for sub-contractor for labour who functioned to manage workers needed by principals. What was clear was that the practice employment through this sub-contractor for labour has long been occurring and they were not registered. As a result, it caused the employment of workers through this system was not efficiently and effectively controlled. There were situations where the welfare of the workers was threatened and the employer that committed these wrongdoings were difficult to be identified and appropriate actions taken against them. As a result, based on the principle of improvement and not at for any negative reasons that these amendments were made to the definition of sub-contractor for labour changing it to contractor for labour (manpower contractor) under Section 2 Employment Act 1955 by merely adding the word ‘principal’ only. The amendment was meant to expand to expand the scope of usage so that it covers and includes the relationship between principal, contractors and sub-contractors that provide manpower. Thus, the Ministry, in good faith, brought about this new definition to control the practice of supplying workers by contractor for labour (manpower contractors) especially in the plantation sector so that it is more organized.

4. For your information, the Ministry did not intend to create simplification or the promotion of contractor for labour (manpower contractors). As such with this new definition it will ‘tighten’ all process of monitoring and enforcement by the Ministry through the Manpower Department (Labour Department). Vide this amendment it also will not provide opportunity to any party who simply want to be or with intention to be contractor for labour to do without complying with the existing labour legislations. The obligation for contractor for labour to register under section 33A with the Director General of Human Resource Department is to provide a register that will ensure workers are given appropriate protection including their welfare with regard contributions to the Employees Provident Fund (EPF/KWSP) and Social Security Organisation (SOCSO/PERKESO). This provision is important for the purpose of monitoring and inspection by the Human Resource Department and further will avoid the happening of violations/exploitations of employed workers.

6. Further, the Ministry wishes to clarify that the amendment to the Employment Act 1955 came into effect on 1 April 2012, is meant to fulfill the needs and current changes by providing a more conducive environment for labour and strengthen the enforcement of labour laws. Amongst the other positive amendments which have been inserted is compulsory payment of wages of workers including domestic workers into bank accounts, maternity leave benefits to all women workers, new provisions to combat sexual harassment at the workplace which protects all workers, mandatory public holiday for Malaysia Day and others.

7. In making the amendment to labour laws, the Ministry always listens and takes into consideration views and feedback from employers and workers. This is to ensure a harmonious labour environment. As a step forward, the Ministry with the approval oif the Malaysian Trade Union Congress (MTUC) and the Malaysian Employers Federation(MEF) have set up a Committee to study the employment practice of contractors for labour. The object of this Committee which has been set up is to propose preventive steps and improvements so that there will not happen any abuse by any of the parties concerned when the said amendments start to be put into effect.

9. In conclusion, in making a new policy and amendment to any labour laws, the Ministry always listens and considers any suggestions advanced by workers or employers and other dialogue partners. In connection with that, whatever decision made is only based on the interest of both parties being worker rights and employer interest which have to be balanced. It is hoped that the recent amendments to the Employment Act 1955 will get the support of all parties to ensure workers welfare is protected and to guarantee harmonious industrial relations in this country.

That’s all. Thank You

“IN SERVICE OF THE NATION”
“Innovative Workers the Movers of Transformation”