the workers started the strike to show their dissatisfaction with the factory’s alleged negligence in handling the health issue of a worker who died of chest problems that day. 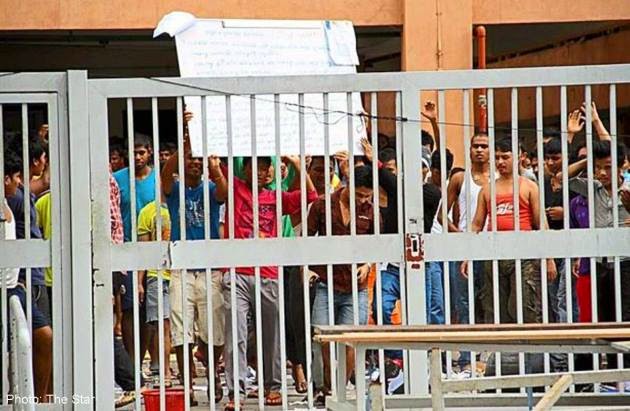 Well, the Star report calls it a 'riot' - but really, when a fellow worker dies because the workers believe that it was the employer's fault or negligence, would not expect some anger and 'outbursts'? We all remember the video footages of the families of the victims in flight MH370...

These workers reacted because of what happened to a fellow worker - and they are also concerned about the wellbeing of the deceased worker's family...

“The workers were just concerned that the company would not pay out the remaining two years’ salary of their deceased countryman as per his contract. We assured them that the company will pay the salary of any foreigners who works with our company under a three-year contract – even if he were to pass away during that period,”

I believe that this demand is reasonable and a good employer would be willing to do this..

I hope that Star will follow-up with a report that tell us more - and whether the employer does good.... will the employer arrange for the body to be returned back to the family in Nepal..? What really happened that made the workers so angry...When did the factory become aware of the victims illness/medical condition? Did they immediately arrange for the worker to be sent to the hospital?

Note also that the Star report did not reveal the name of the company...why did they do this? Protecting the employer? What was the name and age of the victim? What was the agreement reached that the workers decided to go back to work after 36 hours?

Factories must really have some 'health personnel' at their factories, especially those that have more than 1,000 workers - someone who can provide first aid and healthcare. They must also have an ambulance or at least some transport that can speedily send sick or injured workers to the hospital... This, is not the first case, where workers(migrant workers) died because of delay of sending a sick worker to hospital. Hopefully, this employer would do what JCY HDD Technology Sdn. Bhd (follow the link below), which amongst others was

"Company will provide a vehicle and driver on 24 hour standby at the main hostel to facilitate the emergency transportation of worker to hospital for any emergency treatments......On top of the normal workmen compensation benefits, the company had agreed to improve the contribution to the beneficiary of the worker.

Star must also be praised because sadly many media outlets just do not bother about worker issues...

Will the AG charge the employer for the death of the Nepali worker in Pokok Sena, Kedah? Will there be an autopsy to determine cause of death?

Remembering the JCY's 5,000 Workers Protest 2010 - maybe the biggest workers' protest in Malaysia for many years

JOHOR BARU: Some 1,500 Nepalese have refused to go to work for more than 36 hours at a mechanical component manufacturing plant and even flung things out of their living quarters in protest following the death of a colleague.

They threw out pieces of metal and glass, electronic products, chairs and boots from their four-storey hostel, smashing the glass windows of the guard’s post, while some turned a parked van to its side.

The drama started to unfold on Thursday evening at the hostel which is located a stone’s throw away from the plant in Jalan Firma 3 at the Tebrau IV industrial area here.

According to sources, the workers started the strike to show their dissatisfaction with the factory’s alleged negligence in handling the health issue of a worker who died of chest problems that day.

The factory’s management went to the living quarters yesterday and spoke to the workers to find out their concerns. Its executive director Datuk Tan Shih Leng denied that they had neglected the deceased’s initial complaints of chest pains. He said the management had given him medical leave earlier to recover before he died at the hospital.

“The workers were just concerned that the company would not pay out the remaining two years’ salary of their deceased countryman as per his contract. We assured them that the company will pay the salary of any foreigners who works with our company under a three-year contract – even if he were to pass away during that period,” he said.

According to him, factory workers who passed away after exceeding the three-year contract period would get a RM10,000 compensation on top of insurance claims.

Tan said that the workers had agreed to go back to work during the factory’s 7pm shift on Friday. - Star, 24/8/2014,Nepali workers riot over colleague’s death
Posted by WH4C at 1:36 PM No comments: