Migrant workers voted in 'secret ballot' for union recognition, terminated and send back to country of origin?

Migrant workers voted in 'secret ballot' for union recognition, terminated and send back to country of origin? 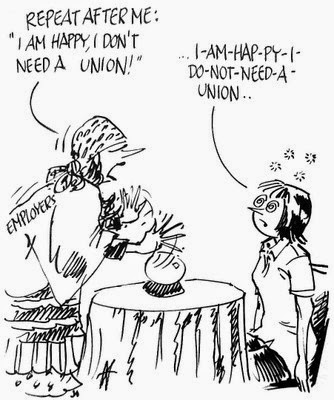 When migrant workers overcome fears, and exercise their right to vote in the 'secret ballot' - whose result will determine whether the Union is accorded RECOGNITION, gets wrongly terminated and sent back to their countries of origin, and this injustice is not highlighted by the affected Union or even MTUC, we should most certainly be worried.

RECOGNITION - In Malaysia, a registered trade union needs also to get the recognition of the employer before they can effectively represent the workers in a particular employer's workplace -- start the process towards entering a Collective Bargaining Agreement, etc. If an employer refuses to accord recognition, then there will be a 'secret ballot' in which all qualified employees who are or can be members of the said union will cast their votes, whereby if the total number of votes cast equals to more than 50% of the total qualified employees, then the Minister will accord recognition to the said union. Migrant workers employed by the employer will also be amongst these qualified employees... Many a time, employers do not want unions - so there is attempts to discourage qualified employees from coming out and voting in favour of the union...and migrant workers are more affected by these 'threats'...

Well, in this case only few of these migrant workers overcome their fear and came to cast their votes - and about 4 were then allegedly terminated and sent back to their country of origin.
Why did the UNION not come out and highlight this grave injustice?
Well, the UNION was successful in this 'secret ballot' - which after this the Minister would sent the official letter confirming that the UNION has been accorded recognition or not - thereafter the UNION or the Employer have the right to challenge the decision of the Minister in court... (For example, Malaysian Airlines(MAS) is now challenging the recognition of NUFAM(National Union of Flight Attendants Malaysia) that was granted by the Minister....this may have started a 'new' trend, i.e. the challenging of recognition even after secret ballots)

Hence, the UNION may have kept quite about what happened to the FEW migrant workers because they did not want to jeopardize the recognition process...Is this right? I do not think so - and the failure to highlight the injustice faced the said migrant workers (or any other member/potential member of the Union) and to fight for their rights is wrong.
UNIONS need to uphold the cause of justice without fear or favour --- fighting for rights is the priority....NOT fighting for rights of individual workers(members or otherwise) because of concern as to possible subsequent effect to the UNION i.e. the possibility that recognition may be denied by the Minister, or the Employer may apply to court to challenge the recognition, or that other actions may be taken against the UNION including de-registration or other actions against the leadership....is not acceptable.

RISKS is always there ....even the possibility of deregistration or even other actions against union leadership is always there - BUT Unions must not be cowed into inaction ... unions, after all, must always be seen to fight for all workers ... even one or two...foreign or national...

The other reason advanced for inaction was because the affected migrant workers did not want to fight - i.e. did not want to file a complaint claiming wrongful dismissal... (Well, the question is whether it was wrong of the employer to cause to terminate and send the workers out of Malaysia back to their home country by reason of them being brave enough to exercise their right to vote in the secret ballot .... The UNION should have highlighted this wrong - clearly a violation of worker rights...

Whether the victim wants to lodge a complaint, and pursue the claim for wrongful dismissal is totally another matter. Further, for a migrant worker this option of lodging a complaint at the Industrial Relations Department(IRD) claiming wrongful dismissal and reinstatement is really not there. WHY? Well, for the whole process, it takes years...sometimes even up to 10 years... and a migrant worker, when terminated also loses the ability to stay and work legally in Malaysia... There is no REAL access for justice for the migrant worker in Malaysia ...

How do you remain in Malaysia without the ability to work and earn an income legally. Yes, the migrant worker can apply for a Special Pass, which will cost the worker RM100 per month, and every month an application has to be made... Where will the migrant worker get his/her food and board? Who will pay for it? On the other hand, a local worker can always find another job and income whilst he waits for the long long process of claiming justice for his/her wrongful termination ....so naturally, most (if not all), migrant workers wrongfully terminated will choose not to even use the mechanism to access justice -

So, the reason that the migrant workers did not want to fight is NO EXCUSE for why the UNION did not take up this case...

The UNION could have informed any number of human rights or worker rights groups, the Malaysian Bar Council, concerned individuals, etc.... and the issue would have been highlighted

... and Malaysia may have taken action to ensure that such injustices never again happens in Malaysia.

BUT, the UNION may have yet to do this.... and, it is still not too late for the UNION to highlight this rights violation... [Failure to act would be detrimental to worker and union rights - why would any worker, especially a migrant worker, join or be part of or support any Union, if the UNION does not fight for individual workers who are victims of injustice...Remember also that it is not just acting - but also to be seen to be acting...so a 'quite' lodging of a complaint would not suffice... ]


Now, only qualified employees, those in the list approved by the employer, the union and the relevant government department can vote during a secret ballot - and, there is no question that these migrant workers had the right to vote, so it is GREAT WRONG when employers take actions against workers for exercising their right to vote....

This is a major issue of concern...

The affected migrant workers may no more be in Malaysia - but the issue cannot be ignored and must be taken up by the UNION, MTUC, Human Rights Defenders, SUHAKAM, Malaysian Government...

Employers who do this to workers must be penalized... it is a violation of the freedom of association - the right to come together as trade unions...

The Migrant Workers Right to Redress Coalition (MWR2R) views Malaysia’s relegation to tier 3 watchlist of the annual US human trafficking report as a serious indictment of the government’s failure to protect the human rights of its estimated 4 million migrant workers,  and refugees.

The tier 3 watchlist simply means that the government has not taken serious and ongoing measures to curb rampant modern day slavery and trafficking in Malaysia, especially among undocumented migrant workers who are said to number over 2 million.

Instead of being in denial and claiming the report to be baseless or based on biased NGO feedback, the government should come to terms with reality and take serious measures to improve the human rights situation of the migrant population.

One immediate step the government should take to protect human rights and improve its image is to allow the right to redress for all migrant workers. The Employment Act allows all workers who are dismissed, migrants included, to file a complaint and challenge the dismissal through the labour/industrial relations department and the respective courts. However, Immigration policy strictly forbids dismissed workers from working for any other employer.

In effect then, without the right to  work, there is no right to redress to speak of for migrant workers in Malaysia.

Not only does this violate basic human rights, but it also adds to the problem of slavery and trafficking. This category of undocumented workers actually enter the country with passports and work permits, but because of bad policies, they lose both papers (since employers hold on to the passports) and become illegal.

The government should enable workers who have filed complaints at the labour/industrial relations department or whose cases are being heard at the Labour/Industrial Court to work so that they can pursue their case.

Contrary to what the government claims, this will not ‘open up the floodgates’ - no worker in his right mind, will without strong grounds fake a dismissal in order to change employer, as winning at the Labour/Industrial Court is not easy, and losing means you will have to leave the country.

The government loses nothing by providing migrant workers the opportunity to seek remedy when they feel they have been wrongfully dealt with by their employers. In fact a proper avenue for redress can remove the freedom of exploitative employers to hire and fire at will, and thereby help contain the rise of undocumented workers.

Migrant workers are invited to work here by the government at the request of employers. The over 2 million undocumented workers are also part of the Malaysian workforce, contributing jointly to the economy of the country. The government needs to be honest and recognise their significant contribution. It must take measures to legalise these workers but not, never, in the 6P way.

The US State Department Trafficking in Persons Report 2014, has downgraded Malaysia to Tier 3 from the previous standing of Tier 2 Watch List

What is interesting is that the main reasons for the downgrading seems to be labour issues - the 'contractor for labour system' ('outsourcing companies'), the move to make migrant workers pay more - the levy, etc..., Read on... I may post more comments about this report later on


Many Malaysian recruitment companies, known as “outsourcing companies,” recruit workers from foreign countries. Contractor-based labor arrangements of this type—in which the worker may technically be employed by the recruiting company—create vulnerabilities for workers whose day-to-day employers generally are without legal responsibility for exploitative practices. 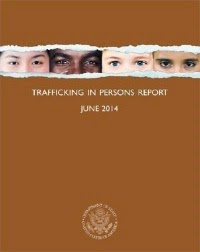 Below is what was said about Malaysia is the said report, the highlights are mine....