"...Malaysia has emerged as a new death bed for Nepali migrant workers leaving Saudi Arabia far behind..." this is embarrassing, and Malaysian government need to respond..

About 113 Nepali migrant workers lost their lives in the destination in the last six months, according to Foreign Employment Promotion Board.

About 324 Nepalis have lost their lives in current fiscal year but Malaysia topped the list with most deaths, said acting executive director at the board Girija Sharma.

The board provides Rs 150,000 compensation to family of deceased migrant workers.

However, migration experts believe that annual death at the foreign land is double than the recorded data.

“We do not have mechanism to keep accounts of dead bodies entering country from Tribhuvan International Airport, which is a shame,” said migration expert Dr Ganesh Gurung.

About 3.5 million Nepalis are believed to be working in foreign lands but only 2.5 million are legal. Of the one million undocumented migrant workers, nearly 200,000 are women migrant workers mainly based in Gulf countries.

According to the board, about 108 Nepali migrant workers have died in accidents. Death of about 64 Nepalis remained undiscovered as they died while sleeping. Such deaths were widely known as ‘silent killer’ among Nepalis working in the Gulf countries.

The board’s record revealed that Nepalis death in the foreign land has significantly increased in the last three years. According to the board, about 466 Nepalis died in foreign lands in the fiscal year 2010-11 and some 643 in a year back.- The Himalayan Times, 21/1/2013, Malaysia records most migrants death
Posted by WH4C at 12:21 AM 1 comment:

Many workers deprived right to Minimum Wages from 1st January 2013

When workers earning less than minimum wages should be the priority, this government fails in its duty to workers

In 2009, the government survey involving over a million Malaysian workers found that 34% of the workers were receiving wages of RM700 or less, which was below the poverty line income

This caused the Malaysian government to step in to protect the welfare of workers in Malaysia, by finally introducing a Minimum Wage in Malaysia - RM900 for workers in Peninsular Malaysia, and RM800 for workers in Sabah and Sarawak.
3 years later, the government came out with the Minimum Wages Order 2012 on 16/7/2012, and provided that workers with employers having more than 5 workers would have to ensure all their workers are paid minimum wages as of 1/1/2013, and for the rest by 1/7/2013. Probationers were discriminated against and their entitlement was only 70% of  the Minimum Wages stipulated. Unlike the past, where probationers are generally new workers just out of school, today probationers include a lot of workers of many years of work. This was because of the short-term employment contracts, retrenchment and termination forgetting that this category of workers also have family/dependents and financial obligations similar to any other worker. Further, Malaysian law still do not provide for any fixed or maximum probation period, and the power to confirm lies with the employer - meaning some workers may still be considered even after years of employment.

Then, recently the government came out with the Minimum Wages (Amendment) Order 2012 on 28/12/2013 which exempted some employers from complying with the 1st January 2013 dead line - some have been given until 1st April, some until 1st July and some even until 1st October 2013. Worst affected are hotel employees for their entitlement for minimum wages is now 1st October 2013.

Exemption was given to employers who were Hotels(including Budget Hotels), Security Service Providers, Bus Operators and over 600 other employers. Worse was that these exemptions were given on employer's application, whereby workers never got the right to be heard or to challenge the said applications. No data was also given in the Order as to the additional monies that will be expended by these employers if they were to pay their workers 'minimum wages', the number of workers affected, or even the profits now being made by these employers all of which would be relevant information. Some of these hotels, security service providers may be earning large profits...

Worst still is that many employers are attempting to include allowances and other benefits into the calculation of minimum wages. Minimum Wages is with regard to basic wages alone - i.e. for 8 hours work,...Sadly the government's National Wage Consultative Council came out on 6th September with an odd Guideline on the implementation of the Minimum Wage, which was also certified by the Minister. These was just a Guideline, which really was not legally enforceable but it gave employers ideas.... bad ideas certainly not in favour of workers.

Meanwhile, since July 2012, many 'bad' employers have been trying to get workers to sign agreements that will effectively deprive them of some existing benefits like allowances and other benefits. End result, there may be no increase in take-home pay, or even in some cases a decrease. Workers with UNIONs are in a better position, as they could deal and negotiate as a collective force BUT workers with NO TRADE UNIONS are easily 'forced' to agree to new pay schemes... and many employers will deal with workers individually.. Workers on 'fixed term employment contracts' also really have no choice for a refusal may mean non-extension or offer of a new employment contract at the workplace...

WORKERS AT WORKPLACES SHOULD NOT SIGN ANY NEW AGREEMENT OR PROPOSED AMENDMENTS TO EXISTING AGREEMENTS - ONCE YOU SIGN, YOU EFFECTIVELY LOSE YOUR RIGHTS - Of course, this government did not come out with any GUIDELINES for workers(but there was a FAQ in Bahasa Malaysia only which is inadequate as to rights to object, and what to do when no agreement can be reached, or when workers who disagree are not continued to be employed) - They should have the right to refer the matter to the Labour Departments, who should then step in to ensure that workers are not cheated of their rights by some employers.... BUT wait, our labour Ministry is now called the 'Human Resources Ministry' - and the name says it all....it is no more the Ministry that will protect and fight for the welfare of workers - but is more concerned with Employer's Human Resources. Now, the new priority and concern is 'Industrial Harmony' - no more JUSTICE or RIGHTS...
Posted by WH4C at 10:01 PM No comments:

Chou Bun Eng, secretary of state for the Ministry of Interior, who headed the delegation, said the inquiry found four types of violations. “There are victims of sexual exploitation, human trafficking, overwork and no salary, and forced labor,” she said.

Likewise with crime, how can the police continue with the investigation...how can they prosecute when the victim (and even material witnesses) who are migrants are no more in Malaysia.

Malaysian Immigration Department and the Malaysian Government must ensure that no migrants ability to stay and work legally is extinguished if there is a pending claim, investigation, court proceedings, etc... Malaysia must change its attitude of using migrants just for labour - BUT disinterested in protecting their rights and welfare effectively. Malaysian government propagates this culture of exploiting migrant workers...when what is needed is DETERENCE that will ensure that NO EMPLOYER EXPLOITS WORKERS.  Sadly, the treatment of local workers is similar - Employers found guilty of not paying wages, for example, is ordered to pay the aggrieved worker JUST what should have been paid - SURELY, this is not right - and certainly is no real penalty - and would only encourage employers to go on cheating workers - for after all, if caught, all they need to pay is what they cheated the worker off in the first place. Rightfully, the law should require them to pay DOUBLE or maybe even TRIPLE plus maybe a sum for all the pain and suffering caused... 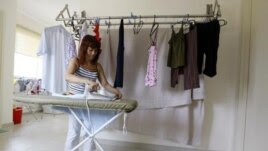 Gelia, a maid works in a condominium in Kuala Lumpur, Malaysia, Wednesday, June 17, 2009. At least two women have died in the custody of recruitment firms prior to scheduled departures for Malaysia.
Theara Khoun, VOA Khmer
PHNOM PENH - A Cambodian investigative committee has found widespread exploitation and rights violations of Cambodian migrant workers in Malaysia.

The 22-member committee, which included government representatives, rights workers and other agencies, spent two days in Malaysia and found workers vulnerable to overwork, forced labor and sexual exploitation, among other dangers, as more and more Cambodians seek work abroad through negligent recruitment agencies.

Chou Bun Eng, secretary of state for the Ministry of Interior, who headed the delegation, said the inquiry found four types of violations. “There are victims of sexual exploitation, human trafficking, overwork and no salary, and forced labor,” she said.

The committee’s findings are consistent with those of other rights groups that have investigated the working conditions in Malaysia, where many Cambodian women from rural areas find work as maids.

“Some laborers have been tortured and abused by the house owners,” said Samleang Seyla, country director of Action for the Children. “For some others, their employers don’t pay their salaries.”

And there is little legal recourse for Cambodian workers in Malaysia if they aren’t paid or are abused, he said. “Some complain about the difficulty finding legal aid. In their view, they are unlikely to win a case, because they don’t have money; and second, it requires a lot of time. That’s why some of them come back to Cambodia without proper legal resolutions.”

On the two-day visit, the delegation met with representatives of the Malaysian government, an employers association, the Cambodian Embassy in Kuala Lumpur and with NGOs.

Cambodia issued a moratorium on the recruitment of workers for Malaysia in 2011, following widespread reports of abuse, including the deaths of some workers. Human Rights Watch said in a November report that prior to the ban, girls as young as 13 were being sent to Malaysia through recruitment agencies.

An Bunhak, chairman of the Association of Cambodian Recruitment Agencies, who joined the delegation, said a lack of training and poor communication lead to misunderstandings between employers and workers. “For example, when they are asked to bring a bowl, they bring a urine pot,” he said. “This in turn makes their bosses angry, leading to violence.”

Cases where underage girls are sent to Malaysia are rare, he said, and in those cases the companies responsible for recruiting them have been shut down.

An estimated 50,000 Cambodian workers, legal and illegal, are thought to be working in Malaysian households, factories and restaurants, earning between $135 and $200 per month.

In Malaysia, the committee interviewed Om Bopha, a senior adviser to the Cambodian Embassy in Malaysia, who said the Ministry of Labor is not properly monitoring the workers who are sent to Malaysia and that some Cambodian recruitment agencies send young workers or untrained workers, with little monitoring.

Chou Bun Eng said there is little follow-up on the transfer of workers, who are moved from a recruitment company in Cambodia to a receiving company in Malaysia and on to a local employer.

“In such hand-to-hand transfer, to what extent is there responsibility?” she asked.- VOA [Voice of America Khemer Southeast Asia News, 20/1/2013, Inquiry Finds Abuse of Migrants in Malaysia
Posted by WH4C at 9:25 PM No comments: