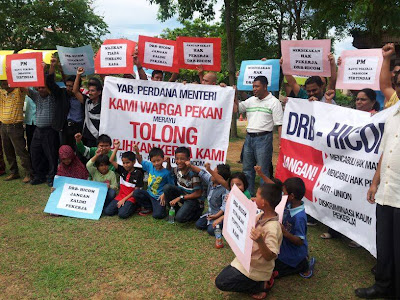 Background
On 3/5/2013, a group of 18 workers submitted the MTUC memorandum to one of the contesting candidates in the Pekan parliamentary constituency, which also happens to be the constituency that the Prime Minister of Malaysia was contesting. The 13th General Elections was held on 5/5/2013, and these workers were trying to get commitments for worker demands/rights from the candidates before voting day.

HICOM Automotive Manufacturers (Malaysia) Sdn Bhd, which assembles automobiles for Suzuki, Mercedes-Benz and Volkswagen, has issued show cause letters on  22/5/2013 to 16 workers, and speedily proceeded with the 'Domestic Inquiry' which began on 11/6/2013. ISUZU HICOM Malaysia Sdn Bhd, that assembles automobiles for Isuzu, also issued show cause letters to 2 workers and conducted domestic inquiry.
* The Domestic Inquiry for 16 workers was done in One(1) day, and the  National Union of Transport Equipments & Allied Indutries Workers(NUTEAIW) were not allowed to represent the workers in the DI - only the members at the factories concerned or the 'work site committee of the Union' were allowed to represent these workers. The collective bargaining agreement is between NUTEAIW and the factory.
25/6/2013 - a joint statement "DRB HICOM MUST RESPECT THE CITIZENS’ RIGHT TO PARTICIPATE IN THE DEMOCRATIC PROCESS IN MALAYSIA – Stop disciplinary action against workers for exercising their political rights (which is now endorsed by 52 groups)
* A letter was also sent to Prime Minister Najib Tun Razak, enclosing the said joint statement - BUT to date there has been NO response from the PM
19/8/2013 - all 18 workers were terminated 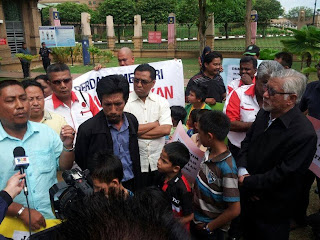 20/8/2013 - National Union of Transport Equipments & Allied Indutries Workers(NUTEAIW), being the Union the said workers belonged to, issued a Media Statement, "Termination action against workers exercising their political rights is abhorred"

PUTRAJAYA: Eighteen former employees of a government-linked company have alleged that they were dismissed from their jobs after submitting a memorandum to a politician in the run-up to GE13.

According to National Union of Transport Equipment and Allied Industries Workers (NUTEAIW) president, Mohd Yusof Hamidi, the employment of 18 of its members were terminated on Aug 19, after being suspended from work for 85 days following a domestic inquiry.

Mohd Yusof said the 18 workers, formerly employed at DRB-Hicom’s automotive subsidiaries at Pekan, Pahang, were involved in submitting a Malaysian Trades Union Congress demand for union rights and benefits to PKR candidate Fariz Musa on May 3 in Pekan.

"The charges levied against our members were (that they had undermined) the good name of the company and (attempted to) bring about any form of influence or outside pressure to support any claim that is related to service, be it an individual claim or claims of the employees.

"The employers allegedly were of the position that the participation and action of the 18 members was contrary to the interest of the company, and giving a false impression that the company was involved in politics," said Mohd Yusof in a memorandum which was submitted to Najib’s office here Wednesday.

The workers had gathered outside the Prime Minister’s Office Complex, bearing banners seeking Najib’s help to be reinstated to their former positions.

Meanwhile, DRB-Hicom Berhad maintains that the dismissal were in accordance with the relevant employment and industrial law of Malaysia.

"The disciplinary action taken against these workers was conducted in accordance with all applicable laws and company policies in relation to breaches of the company’s terms and conditions of service arising from the unauthorised representation of the company which were recorded, and subsequently uploaded online for public viewing.

"It was not for exercising their political rights as alleged by the said workers or parties that claim to be representing them," the company said in a statement to The Star. - Star, 11/9/2013, 18 former DRB-Hicom employees cry foul over dismissal