The three deaths in December 2013 at a plywood manufacturer seem to have been a well-kept secret, and it is highly likely, given the latest death, that no one was held accountable, writes Rani Rasiah. 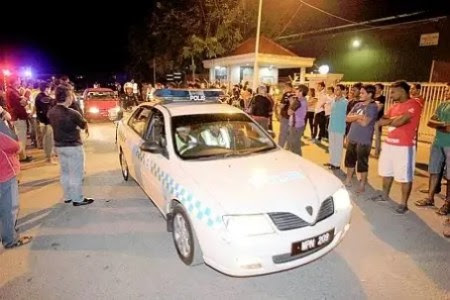 Migrant workers protest over deaths of colleagues
About 8.00pm on 11 January 2014, Nepali workers of the plywood manufacturer Besgrade Products Sdn Bhd in Jabi, Pokok Sena, Kedah, began gathering outside their employer’s residence to urge him to send a fellow worker who was having difficulty breathing to hospital.
The workers were anxious as, just a month earlier, three Nepali workers with similar symptoms had died. Their deaths had been cryptically classified as ‘sudden death’.
Rushing the worker to the hospital or calling an ambulance would have been the expected course of action but unfortunately that didn’t happen. Instead of calling the ambulance, the employer apparently contacted the police.
The police arrived, dispersed the workers whose numbers had by then grown to near 200, and arrested three of the workers. In the meantime, the worker who had complained of shortness of breath died (The Malaysian Insider, 12 January 2014).
This news item appeared as almost a footnote in our mainstream newspapers. The Malaysian government prides itself on its superior business-friendly environment. For employers, it is great news, but for workers it means low wages and an erosion of rights. Under this arrangement, workers lives are cheap – and those of migrant workers even cheaper.
The PSM lodged a police report of criminal negligence against the plywood company for allegedly failing to get medical help for the ailing worker, thereby leading to another death.
The report asked for a police investigation into the cause of the deaths – if they were linked to exposure to chemicals or poison at the workplace or conditions at workers’ hostel – and what action had been taken by Besgrade Products Sdn Bhd after December to prevent further deaths.
This tragic and totally unacceptable episode raises questions about the apparent irregularities or inadequacies of the departments involved in the procurement and management of migrant workers in Malaysia.
Why did the police arrest the friends of the victim and not the employer whose inaction led to the worker’s death? The police themselves acknowledged that the workers had gathered peacefully to get help for their friend, thus implying there was no reason for arrest. And so the arrest of three Nepali workers appeared to be unjustified and arbitrary, and merely seemed to confirm the apparently unwritten rule that the police must side with the bosses under any circumstances.
Was the Department of Safety and Health aware of and did they investigate the cause of breathing difficulties and sudden death among the workers of Besgrade Products? A study would determine if the deaths were linked to the work environment or nutrition or some other cause.
The Immigration Department and Human Resources Ministry are involved in deciding requests for the supply of migrant workers by employers. What was their action on Besgrade Products Sdn Bhd after the deaths in December 2013?
The three deaths in December at Besgrade Products seem to have been a well-kept secret, and it is highly likely, given the January death, that no one was held accountable. This death too may be swept under the carpet if the victim’s family is quietly compensated and if the company and relevant departments make arrangements to send home workers who fear they may be future victims.
This must not be allowed to happen. Besgrade Products Sdn Bhd, which according to its website, is a major supplier of plywood to both domestic and international markets should be investigated for what alleged inhuman negligence, which contrasts with its hollow-sounding tag line ‘A model plywood manufacturer with a caring heart.’
The relevant government departments should investigate and take action under the law to serve as a warning to all employers to respect and value the lives of their workers. - ALIRAN, 20/1/2014, Migrant workers’ deaths: Government should act against manufacturer
Source: Charles Hector Blog
Posted by WH4C at 1:27 AM

eToro is the ultimate forex broker for new and advanced traders.